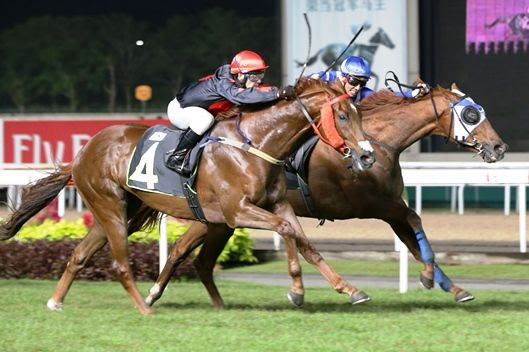 The bar was deemed to have been raised a fraction too high this time, but Black Swan silenced the doubters with yet another gutsy win in the $100,000 Kranji Stakes B race over the mile on Friday night.

Not too long ago, the Sebring five-year-old was struggling to shed his maiden status, until he finally got off the mark in a Class 5 race over 2000m on June 11, 2017.

The floodgates have opened up since, with three more wins added to his tally, the last coming at his last start in a Class 3 race over 1700m.

Black Swan (Noh Senari, on the inside) pulls out all the stops to deny Maximus (Troy See) of a win.

When Black Swan’s name popped up among the big 14-horse field in the Kranji Stakes B race, the consensus among the experts seemed to be the fairytale run would come to an end as reflected by his unusually long odds of $136.

Not to mention he might be a bit out of his depth against stronger opposition in the likes of Certainly, Excellency or Mighty Kenny.

But trainer Steven Burridge and apprentice jockey Noh Senari went in with no pressure, just a very simple battle plan: Ride him for luck buried away on the rails if possible.

Noh, who had already won a race earlier aboard Vesontio, listened to the instructions to a tee and the end result was a riveting nose-win from Maximus (Troy See).

Midfield and scraping paint throughout, Black Swan was not really motoring home at the 400m, but after Noh pulled the stick on the Big Valley Stable-owned gelding, he started to pin his ears back and lower his neck. Ducking back to a gap on the inside, Black Swan suddenly hit top speed as he collared Maximus on his nearside close home before gaining victory by the proverbial pimple.

Darshini (Wong Chin Chuen) ran third another 1 ½ lengths away with Robin Hood (Olivier Placais) another half-a-length away in fourth place. The winning time was 1min 35.68secs for the 1600m on the Long Course.

From being a Class 5 horse, Black Swan has now become a handy moneyspinner for his connections with close to $300,000 in stakes earnings.

“I told Noh to just ride him for luck and it’s paid off,” said Burridge.

“With Michael Rodd (Certainly) and Mighty Kenny in front, we just had to follow them and bide our time. The Gold Cup could be a race for him now as I am sure he will run 2000m.

“Thank you to Masa Otani for giving me time to let his horse come right.”

Noh said he was not very bullish going into the race but just stuck to the script, and to his surprise, everything just fell into place.

“Mr Burridge just told me to stay on the inside and ride him for luck. Don’t go out, stay there,” said Saimee Jumaat’s apprentice jockey.

“But he came home very nicely for me. I didn’t expect him to do that even if I know he was in good form.”

With the riding double, Noh takes the lead in the Singapore apprentice jockeys’ premiership on six wins, tied with Zawari Razali, but ahead on a better countback for seconds.

The Singaporean lad, however, was not too fussed about the feat, knowing full well there is still a long way to go. To him, what was more important was the inner peace he has now found.

“It’s nice to ride a double as competition is so tough these days,” said Noh who made his comeback last year after nearly giving the game away due to some personal issues.

“The other winner (Vesontio) is a very nice horse and I’m just lucky to get the ride. I’m not sure if I will ride him again, but I certainly hope so.

“I’m in a happy place now, both physically and mentally. Things could not be going any better at the moment.”