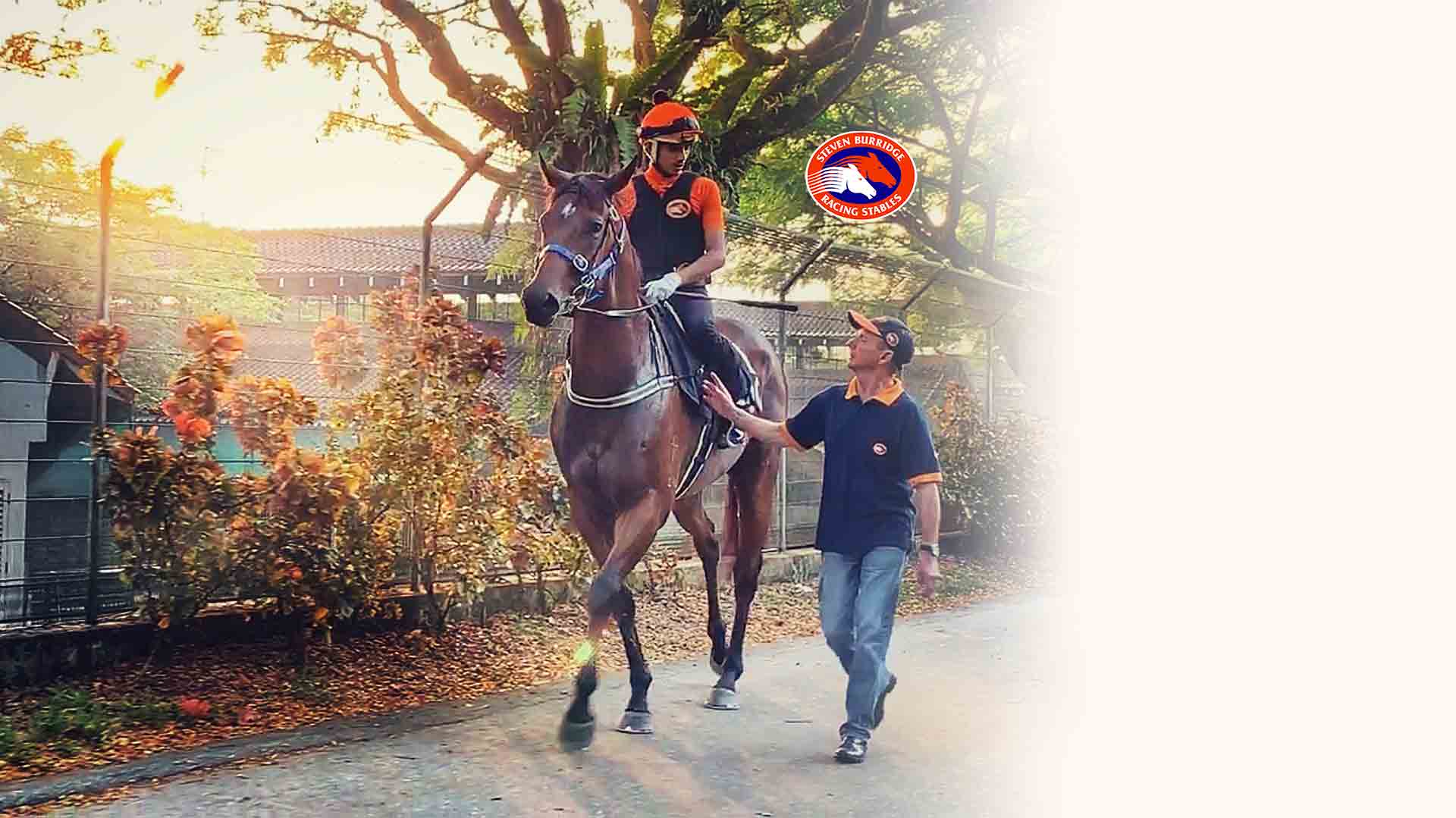 Our team of 7, together with Jules, and led by Steve, works as one cohesive group, who are responsible for maintaining the yard, managing the welfare of the horses and developing the fitness and performance of all of the thoroughbreds in training.

With an average age of 40 years, and an average career span of 25 years, most of the team have spent their entire adult life working in some capacity with horses- mainly at the track and together they bring a wealth of experience, knowledge and maturity to Team Burridge.

A father of two, Jarin enjoys family time when he is not with the team and horses at Steven Burridge Racing Stables.

“Hard work is everything.”

The epitome of diligence and dedication, Jarin, the almost indispensable supervisor at Steve Burridge Racing Stable, was exposed to stable life from very young. His father used to work at the previous Turf Club in Bukit Timah and the young Jarin grew up learning about horses and caring for them. His present career is a natural progression of his love and aptitude for horses.

A dedicated veteran and a fair supervisor to the rest of the crew, Jarin is also the communication bridge among the team members of the Steven Burridge Racing Stable. He maintains the camaraderie among the team and builds rapport by keeping everyone close to one another. He is the Uncle Agony of sorts and a role model for the rest of the crew. His positive attitude in the face of difficult times with the horses, his consistent sheer hard work (you can see Jarin at the stable 4am almost every morning!) are qualities that the rest of the team can emulate.

With a very steady hand, Jarin operates the high speed galloping treadmill that sees up to 15 horses, which includes 2 to 4 gallops per morning. He gathers all the heart rates and recovery rates and has built up a vast knowledge of horse fitness over the many years he has operated the treadmill. His rapport with the horses is no less than what he has created with the team. He readily acknowledges the hard work required to keep the horses trim and fit for races. He believes in total concentration on work and maintains that this job is certainly not for the weak-hearted.

His ability to sense horses’ temperaments and adapt quickly is an invaluable asset for his job scope and the racing stable.

“My unforgettable memory is winning the consolation award for ‘Best Groom’ .”

Fandi has known Steve for more than 6 years while working as a groom in other stables. Having grown up around horses, his love and skillful handling of the temperamental equines seems almost inborn within him. These skills are useful in his current job in managing the race horses as an assistant supervisor at Steven Burridge.

Highly sensitive and alert to the horses’ mood, he calls them the gentle animals despite having had some knocks and falls. He is adept in understanding the equine body language and responds accordingly while saddling up the horses ready for the track riders. He has to see that the right 8 horses are placed into the horse walker while saddling up 8 horses he has just removed and so on. This job requires patience as some horses are nervous or impatient to get moving while being saddled. He believes harsh handling of the horses is futile as you don’t get the desired response from them. Fandi is also on hand to saddle up at the races which is a very responsible and crucial job. He is certainly a large cog in the wheel at Steven Burridge racing stables.

A proud father of two boys, he indulges his sons whenever he is not at work.

Nin (Ichnin) – Foreman, Groom coordinator
A real old timer, Nin started to work with horses in 1970 at the Bukit Timah Turf Club. He was trained by his piers to think and feel horses as well as all aspects of horse racing and looking after a racing stable.

It was not long before Nin became a team leader and was mandor (foreman) for J.A. Spencer and then Gary Breukleun for many successful years. It was when he was foreman for Claude Charlet that Nin and Steven Burridge first met.

When the new track opened at Kranji, Nin hooked up with Anthony Riley and stayed with him until his departure in 2004. His time of departure was exactly the time that Steven Burridge set up shop in Singapore and the rest is history.

Nin is responsible for all the grooms, he sorts out their holidays and off days. Every morning Nin follows the work list and is responsible for getting each horse groomed and saddled for the designated trip so that the track riders can jump off one horse and straight onto the next. He instructs the grooms and points them in the direction of work needed doing. In a nut shell, this gentle Singaporean is the ‘cog in the wheel’ and makes everything work along smoothly.

Nin has 3 children, 2 daughters and a son who is currently working hard with another trainer in the Turf Club to become an apprentice jockey.