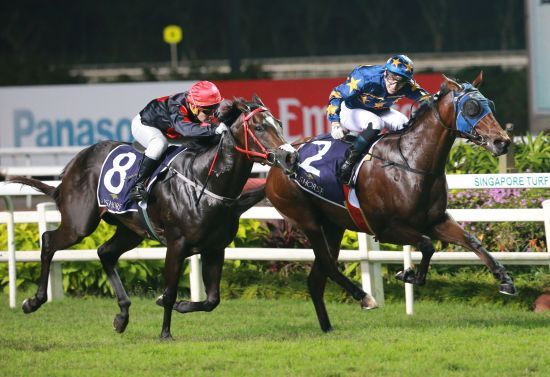 The victory was harder to engineer than expected but favourite Lim’s Lightning still got the job done in the $325,000 Group 2 Aushorse Golden Horseshoe (1200m) on Friday night.

Unlike his emphatic four-length win in the third Leg of the Singapore Golden Horseshoe series, the IRT Juvenile Stakes (1200m) on June 15, Lim’s Lightning ($12) had to flex every sinew of his athletic 508-kilo frame to overpower a very tenacious foe in surprise packet Galvarino.

Again ridden by his last-start winning partner Ryan Curatolo, Lim’s Lightning actually enjoyed an energy-saving soft run in transit after jumping from barrier No 2, settling cosily in the box-seat behind the pacy Lim’s Dream (John Powell) with Galvarino (Troy See) for company on his outside.

Behind, the rest of the capacity 16-horse field was fairly strung out with many of the top picks who had drawn the cheap seats looking hard-pushed to make up the deficit, notably the unbeaten Pennywise (Nooresh Juglall), who was further compounded by a tardy getaway, Siam Vipasiri (Daniel Moor) and Toosbies (Michael Rodd).

As the leading bunch swung for home, Lim’s Dream quickly capitulated, but it was Galvarino ($151) who drew first blood as he strode to the front with the cheek of a juvenile who had thus far exhibited more prowess (of the untutored kind) at the barriers than down the home straight, though he did run a decent fourth at his only start in that same third Leg won by Lim’s Lightning.

That day, the son of Stryker was left standing more than four lengths astern when Lim’s Lightning bolted, but the roles were switched in the grand final as he turned into the one to chase down, absolutely looking the part as he kept knuckling down to the task with 200m to go.

But class prevails in adversity. Taunted and caught a little on the backfoot, Lim’s Lightning did not take it lying down.

Responding to Curatolo’s urgings, the son of Lope De Vega rose to the challenge as he snuck up on the inside of Galvarino, gnawing his way back with every stride towards a most regal showdown inside the last 100 metres.

Two youngsters, raw in all their glory, but fighting tooth-and-nail as much as their unbridled talent can afford them, with the nod eventually going to the punters’ elect by a short head. Conquered he may have been at the last hop, but the gallant Galvarino had also conquered many new admirers.

Still, the run of the race had to be from My Big Boss (Vlad Duric) who no doubt vaulted his way into the blackbookers with a scorching late dash on the outside to secure a laudable third place another one-and-three-quarter lengths away. The winning time was 1min 10.07secs for the 1200m on the Short Course.

Winning trainer Steven Burridge, who was snaring his third Aushorse Golden Horseshoe win after Pitstop (2012) and Lim’s Racer (2016), praised the people behind the scenes in his victory speech, particularly former jockey Richard Lim for helping the previously wayward juvenile turn the corner.

“The horse hasn’t run in one month. We had to nurse him back to fitness,” said the Australian conditioner.

“Big thanks to my staff, my wife Julie of course, and also, Richard Lim who has done a good job on him. He was quite a handful earlier and Richard has spent a lot of time educating him properly.”

The other main beneficiary of all the backroom boys’ hard work was of course Curatolo, the former Macau-based French jockey who was claiming his first Group success in Singapore.

“I’m really delighted with that first Group win in Singapore,” said the US-trained hoop who was also ringing up a hat-trick of wins, having earlier saluted aboard Smooth Operator and Turquoise King.

“He’s a very good racehorse with a great pedigree and he proved it again today. The last 200m was not as strong as at his last win, but that was because he was not so comfortable on the inside as he is on the outside.

“I’ve said all week it wasn’t an easy race, but he proved he was something special with the way he fought all the way to the line.

“I’d like to thank Steven Burridge and (racing manager) Mick Dittman and all the staff. It was a great team effort.

“Things are going well for me here, and I’ve got so much to look forward to. I just have to keep on going stronger.”

Dittman said the stable was very proud of their second Aushorse Golden Horseshoe winner after Lim’s Racer, but also paid compliments to a trainer he has now worked closely with since the champion owner’s 2015 Kranji comeback after a hiatus.

“He showed some ticker out there tonight that horse. The second horse gave a good kick, but he fought back in the last 50 yards,” said the former Sydney champion jockey known as The Enforcer.

“We’re very proud of him considering he’s had only three starts. He’s got a good future.

“It’s not been easy for Steve to keep that horse up in the last three to four weeks, but he’s victorious and we’re very happy.

“Mr Lim (Siah Mong) puts a lot of money in races and loves his races. Those big races are so important to him.

“It’s great to get to the big races and have the right horse to get it right.”

Adding on to the $56,000 already in the bank following his second-up win in the IRT Juvenile Stakes and a debut third in a Novice race, Lim’s Lightning has amassed close to $290,000 in earnings, more than recouping his purchase price tag in only three runs.