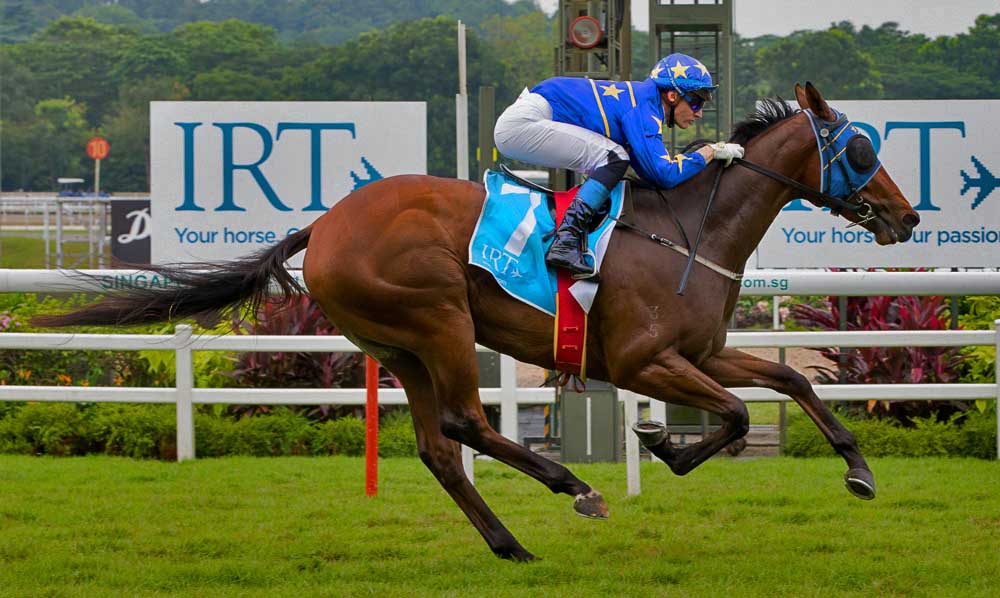 The 26-year-old rider fractured his right ankle on May 4 after a fall from the Mark Walker-trained Lim’s Rhythm (incidentally his one and only ride this Sunday in a Restricted Maiden race over 1600m) on the way to the barriers, and was told he would need six weeks to recover.

But thanks to the “miracle hands” of a Chinese therapist and regular fitness workouts, Curatolo, who rode in US and Macau previously, made his racing comeback one week earlier on Friday with a healthy book of five rides.

After two unplaced rides aboard Swift Embrace and Sacred Galaxy, Curatolo was right on target on Lim’s Lightning in the third Leg of the Singapore Golden Horseshoe series.

“I was out for five weeks, and I was working with a Chinese therapist who was amazing. I am very thankful to him,” said Curatolo, who is at his 23rd win of the season.

“I had been eating well, but I had to start to diet as I got a little heavier, but now my fitness is pretty good.

“I’m very pleased to get the opportunity (from owner Mr Lim Siah Mong of Lim’s Stable), and I thank everyone who has been supporting me.”

On the two-year-old son of Lope De Vega who last ran third on debut in a Novice race over 1200m with Daniel Moor aboard, Curatolo noted his greenness, but was glad with the way the gelding raced away to score.

“I watched the replay and studied the race. He did not have the best trip,” said Curatolo.

“Today, he broke from barrier 13, put himself in a good position. I just sat there and relaxed.

“He was very comfortable, and when I pushed the button, he just raced away.

“He’s still a bit green, but he will improve further from this race.”

The Australian gelding was seen bustled up by Curatolo at the start to sit in a one-out-one-back position behind Makkem Lad (Alysha Collett) and Salamence (Benny Woodworth), who were both vying for the lead in front.
While Lim’s Lightning was trapped behind a wall of horses on the inside round the home turn at his first run, the $23 second-favourite was peeled out to the outside to make his move this time, before drawing clear for a four-length victory from Makkem Lad.

$19  favourite My Big Boss (Daniel Moor) made up ground late to finish third another half-a-length away. The winning time on the Short Course over 1200m was 1min 10secs.

Winning trainer Steven Burridge was only hoping for luck when the Lim’s Stable-owned gelding drew barrier 13, but thought his previous run in a Novice race had benefitted him.

“Mick Dittman (Lim’s Stable’s racing manager) and myself spoke about it, and we thought he had a bit of ability, so we ran him in a Novice race first-up,” said the Australian handler.

“It’s always good to educate these young horses, and he probably ran a little better than we thought.

“With the wet track and all, we knew the experience would do him a whole lot of good.

“But when the barrier 13 came up, you just have to hope for luck. The horse was still quite green, but Ryan rode him very well.

“If he pulls up well, we will definitely look at the next two Legs of the series.”

With that first win, Lim’s Lightning has earned around $64,000 for connections, inclusive of a $10,000 bonus for being an Australian-sired horse bought through the Magic Millions Gold Coast Ready to Run Sale for A$50,000.