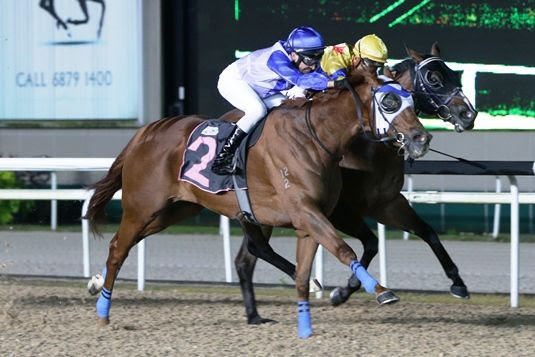 Australian jockey Michael Rodd took the lead in the Singapore jockeys’ premiership following a riding treble on Friday night, but still showed his usual humbleness, especially after his first-pin win aboard Black Swan.

Sent out as the $13 favourite, the vastly-improved son of Sebring had to pull out all the stops to overcome a very resilient Panache (A’Isisuhairi Kasim) in the concluding stages of the $80,000 Class 3 race over 1700m.

Rodd was seen at his usual best, timing his ride to perfection as he stoked Black Swan up from the 700m to edge closer to the leading pack made up of Panache and Hidden Promise (Vlad Duric) before reeling in the pair for a half-length win.

Black Swan (Michael Rodd, No 2) gets the better of Panache (A’Isisuhairi Kasim) by half-a-length in
Race 3.

Panache was game in defeat. The Lee Freedman-trained son of Spinning World repelled Hidden Promise’s stinging challenge rather well in the home straight, but found one better in the end.

Hidden Promise shortened up inside the last 100m to run third another 2 ¼ lengths away while the other five runners did not play a significant part in the event.

While it looked like another vintage Rodd, the modest Melbourne Cup (Efficient in 2007) and Singapore Gold Cup-winning (Gilt Complex last year) hoop explained he had to apply a few recently-learned tricks of the trade from none other than former three-time Singapore champion jockey Manoel Nunes.

“Manoel and I used to ride trackwork together last time and he would always be yelling like a boss to me. Change the lead, change the lead!” said Rodd.

“I always thought horses changed legs naturally but Manoel explained to me it’s the jockey who had to get them to do it. I’ve learned so much from him and he’s taken my riding to another level – thanks Manoel.

“Like tonight, Black Swan was on his inside leg down the back and as he does, was wobbling coming to the home turn. But at the 300m, I got him to switch to his outside leg, from his nearside to his offside front and he just found another gear.”

Black Swan has taken his stakes earnings to just under the $240,000 mark for the Big Valley Stable.

Rodd also praised trainer Steven Burridge for the way he has nurtured the Japanese-owned five-year-old late bloomer into a four-time winner at the last 10 of his 30 starts.

“Sometimes we put pressure on these young horses far too soon. Steve has left this one alone and it’s done wonders on his confidence,” said Rodd.

“Not too long ago, he was struggling, but look how far he’s come. He is now winning in a quality Class 3 race.

“Steve has done a good job to keep him happy. I wish I was a pair closer tonight, but the two horses in front did a fair bit of work, and I just bided my time.

“He was in a good position down the hill and once he was on his right leg, he just quickened so well.”

With his hat-trick of wins, Rodd has propelled himself to the top on nine winners, one win clear of 2017 Singapore champion jockey Vlad Duric, who steered one (Kingsman) home in the penultimate race (see other report).

As for Burridge, the win stretched his current lead on the 2018 table to three winners – on eight, three clear of five trainers (Alwin Tan, Shane Baertschiger, Daniel Meagher, Michael Clements and John O’Hara).

“I think there is a bit of maturity (to explain Black Swan’s radical transformation),” said the Australian conditioner.

“It has taken a long time for him to put it altogether. He used to throw his head in the air, but he is all good now and Michael rode him very well.

“It’s also good for Masa Otani who has stuck with both (trainer Hideyuki) Takaoka and myself for so long.”