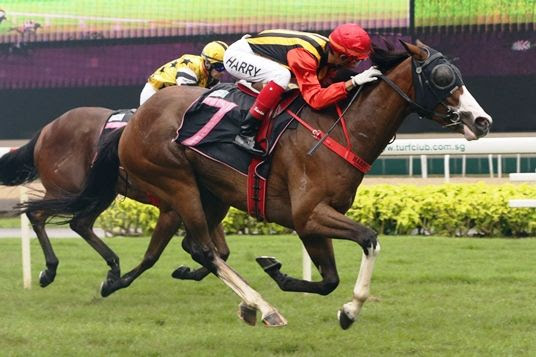 Former two-time Singapore champion apprentice jockey A’Isisuhairi Kasim has vaulted to the top of the heap in the senior league for the first time of his young career after he sprang a late riding double on Sunday.

The 2018 season has certainly begun in the best possible way for A’Isisuhairi, or ‘Harry” as he is better known, after he landed the first feature race on the racing calendar, the Group 3 New Year Cup (1200m) with Speedy Dragon on January 1.

One week later, he doubled the score with his best chance of the day, Eclipse Splash and a pick-up ride in the Lucky Last, Sahara Eagle. Both are prepared by his former master Steven Burridge and both were the top picks in their respective contests.

While Eclipse Splash is a horse the Group 1 Raffles Cup-winning jockey (Gift Complex last October) knows inside out for having partnered the Showcasing four-year-old at all his four wins, Sahara Eagle was a former Kembla Grange one-time winner making his Kranji debut.

But from the Colin Keane-owned gelding’s three winning barrier trials at Kranji, A’Isisuhairi knew he had grabbed a good chance of taking the lead, and he certainly did not let the opportunity go begging.

The joint $16 favourite crossed over nicely from his barrier No 9 to easily settle on the paint in the $60,000 Class 4 Premier Division 1 race over 1400m, pinching a commanding break at the top of the straight, only to be cut back late by the other $16 fancy, One Kinabalu (John Powell).

The former John Sargent-trained O’Reilly four-year-old still had 1 ½ lengths to spare from his gallant challenger with third place going to Happy Baby (Olivier Placais) another half-a-length away. The winning time was 1min 22.78secs for the 1400m on the Long Course.

In a way, A’Isisuhairi had followed the same blueprint which proved successful aboard Eclipse Splash (a noted on-the-pace runner) and for six of the 11 winners on that Sunday afternoon, anyway.

Leader bias or not, the Malaysian jockey could not stop enthusing about the Indonesian-owned gelding after he fell in by one length from Absolute Miracle (Olivier Placais) in the $100,000 Class 2 race over 1400m.

“First of all, I have to thank Shankar (Burridge’s track rider) who has done a fantastic job with this horse,” said A’Isisuhairi.

“He rides him every day and he has really helped the horse settle better. He used to be a hothead.

“He ran only one bad race for me and that was at his second start after his first win. I think he’s a horse who was still growing out and he may have felt the pinch second-up.

“He’s a horse who keeps improving all the time, and today, he really felt different, especially when cantering on the way to the barriers.

“He just put himself in the spot and today he really showed how good he was. He is a very honest horse with plenty of ability.

“The soft track didn’t worry him at all. It didn’t make any difference to his action at all.

“He travelled beautifully everywhere and at the top of the straight, once I balanced him up, he just kept going strongly to the line.

“I really think he’s an above average horse and there is a big race for him one day.”

Burridge was a little more measured at the winner’s circle but was also glad he has such a useful competitor in his barn.

“Today he showed he could handle the soft ground. He’s ultra-consistent and has stepped up to the mark again,” said the Australian conditioner.

“He was meant to run at the last meeting in December but he had a foot problem and I had to ease him up. He had four trials mind you and was in really good shape.

“I’m grateful to his Indonesian owner (Iman Hartono) and to his racing manager Sully (Eoin Sullivan) who does a great job in picking their horses.

“We’ll have to be careful with his prep, though, as he can overdo it at times, but I really think he’s a very good horse.”

A one-time winner for trainer Frank Maynard in Malaysia before he was shipped to Burridge’s yard at Kranji, Eclipse Splash has now brought up his Singapore record to four wins and two thirds from seven starts for prizemoney in excess of $175,000 for his connections.