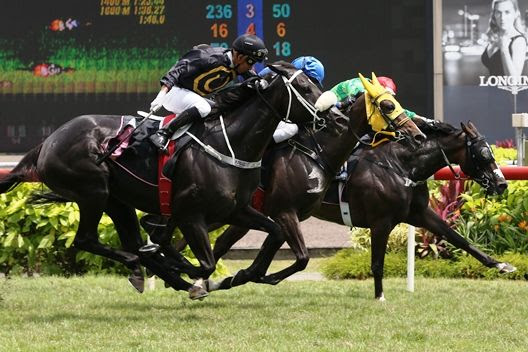 Three races have ended at Kranji and five winners have saluted the judge.

Sorry, trivia buffs, we did not record out first triple dead-heat at Kranji, but it was still a rare phenomenon not seen in the annals of Singapore racing for a long time – back-to-back dead-heats.

Shortly after Lim’s Pershing and Little Master could not be split in Race 2 (see previous report), another dead-heat was in the works in the very next race, the $80,000 War Affair 2014 Stakes, an Open Benchmark 74 race over 1800m, when Mighty Kenny and Makanani finished locked together with the judge again semaphoring the “DH” sign on the electronic board.

The other singular fact which would have record hunters digging deep into their records was Derreck David being the winning jockey in both races. The South African rider was aboard Lim’s Pershing and Makanani. He later sealed a hat-trick of wins when he scored aboard Flash One in the $38,000 Always Certain 2011 Stakes, a Kranji Stakes D Division 1 race over 1200m.

The Japanese-bred and Hideyuki Takaoka-trained Makanani ($23) was whacking away with every stride as she tried to peg back leader Show Far Show Good (Vlad Duric), and just when she had it covered a few hops away from the line, the Ricardo Le Grange-trained Mighty Kenny (Nooresh Juglall, $46) swooped down late on the outside to halve the joy at the eleventh hour.

In a close go, Show Far Show Good on the inside just missed out by a short head to make it a historic triple dead-heat. The winning time was 1min 47.94secs for the 1800m on the Long Course.

“I’m not sure if it’s a record but it is certainly one for me,” said David about his rare feat.

“I’m so grateful to Mr Takaoka who has been my sole supporter for a long time. This filly is very talented even if she has lost her way in recent months.

“But she’s only a three-year-old and she can keep improving. I was happy to settle her outside the leader as she drops the bit when she comes back in and she then loses the plot.

“She dug down deep and it was a great result to get two dead-heats. Thanks to the Singapore Turf Club for the opportunity and for putting on a magnificent show today.

“I’m grateful to ride here, and more so on a Group 1 (Raffles Cup) raceday.”

His colleague and fellow South African Jockey Academy graduate Nooresh Juglall was equally delighted with the happy outcome even if he had to take turns to pose for the camera at the winner’s area.

“I had a great spot on the rails at the rear even if the two horses in front were not coming back. Once he saw daylight, he lengthened up really well,” said the in-form Juglall.

“It was a great effort as he was giving them weight. The 1800m on the Long Course is also not ideal for him as he’s more of a miler

“A big thanks to Mark and Emily Yong for the opportunity.”

Le Grange remembered the Mighty Kenny’s bloodines with a touch of emotion as he led in his 54th winner (no half-winner for a dead-heat recorded on the ladder in Singapore) for the season.

“He is a half-brother to Super Kenny, who was an out-and-out sprinter who, we know got galloped on and had throat surgery. He could have been anything without that,” said the South African conditioner.

“This one goes over more ground and can take both Polytrack and grass. It’s great to have Pat Shaw in town as well as Mark and Emily.

“I’m very grateful to my staff who do a lot of work behind the scenes.”