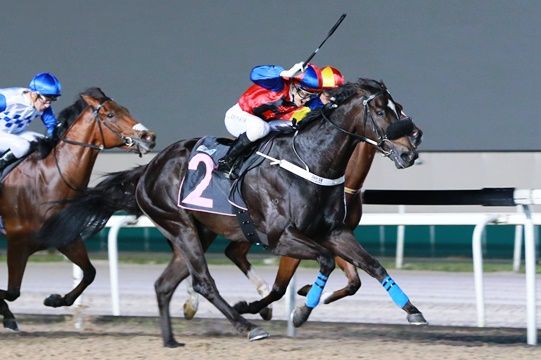 The Keano five-year-old memorably gave the young Ipoh-born rider his first career win on January 23 and that latest success in the $100,000 Kranji Stakes B race over 1000m has brought up their overall combination tally to three wins and one third from eight associations.

The former Malaysian equestrian rider called Autumn Rush, who is trained by his master Steven Burridge, his “special horse” as he weighed back in to his seventh win all-up.

“He’s a very special horse to me as he gave me my first win,” said a beaming Kok.

“At his second win, he flew home for me and tonight, he gave me a beautiful ride throughout.

“The boss told me to go forward but there were a couple of horses who were quicker. So I took a sit instead.

“When I peeled him out for his run, he fought very hard to catch Benny’s (Woodworth) horse (Pioneer Seven).

“I’d like to thank the connections for putting me on this horse.”

Burridge for one has stuck solid with the young man as far as finding a pilot for Autumn Rush goes – even when things did not quite pan out the way they wanted.

“He’s a very honest horse and Simon rode him well tonight,” said the Australian handler as he was wildly cheered on by an ecstatic group of connections and friends.

“I tried to take them up in class with no weight, but he was drawn awkwardly. He drew well this time (two), sometimes it makes a difference, sometimes it doesn’t, but he had the gun run tonight.”

For a fleeting moment, Pioneer Seven gave the impression he would cause another one of those boilovers he is known for when he is left alone upfront, but Kok had other ideas as he waited for the home straight to launch his “special horse”.

Pioneer Seven ($102) put up a spirited fight, but Autumn Rush ($29), in hot pursuit, wore him down with every stride to eventually gain the advantage by 1 ¼ lengths with Marine Treasure (Zy Nor Azman) sharing third place with the fast-finishing favourite Elite Power (Vlad Duric) another head away. The winning time was 58.97 seconds for the 1000m on the Polytrack.

Already a stakes winner of close to $200,000 before Friday’s race, Autumn Rush has now boosted that amount by another 25% with that fifth win. Australian jockey Glen Boss was twice his winning partner before Kok took over.