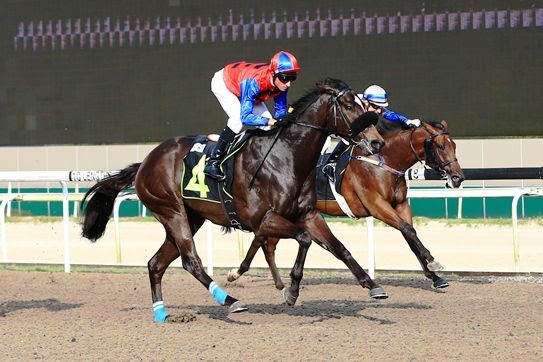 Progressive individual Autumn Rush rounded up a perfect Sunday for trainer Steven Burridge by bringing up a three-bagger.

The Australian handler had already taken a mortgage on the day’s training honours after Premier Fighter and Lim’s Royal landed the spoils earlier on, and his impressive last-start seven-length winner looked the goods to complete the hat-trick in the penultimate event, the $60,000 Class 4 race over 1100m.

The even-money favourite did live up to the hype but another few strides, a $537 shot could have claimed his scalp – Dragon Kingdom (Derreck David).

Autumn Rush was one of the best away and had little trouble taking up the running in the 11-horse field.

Jockey Glen Boss rated him beautifully upfront, and most thought another walloping was in the offing once he straightens up.

But the cattle he was tackling this time were not pushovers like last time. The well-backed Knight Judge (Gerald Mosse) was running on steadily, but probably not cutting Autumn Rush back as decisively as he ought to.

The Fat Lady could not yet sing, though, with Dragon Kingdom making things interesting late in the piece, but the top elect’s legion of backers could breathe better as Autumn Rush had put too big a space on the chasing pack to be caught. He fell in by one length from Dragon Kingdom with Knight Judge having to settle for third place another half-a-length away.

“He trialled very well the other day. He did 35 ½ and he was caught out wide doing it easy,” said Burridge.

“I was very happy with his condition going into today’s race. He’s a horse on the up but it’s hard to say how far he will go; he’s making his own luck himself.

“Today was a great day at the office, and here I have to thank my wife Julie and all my staff. They work hard and they are getting the results.”

Boss, who just returned from an unsuccessful one-day trip to Melbourne to ride at the Australian Cup meeting, was rapt he had come back a winner to a place he now calls home.

“Physically, this horse is a bit of a goose. He’s very impulsive, always in a rush and we’ve had to teach him to cool things off,” said the Australian jockey.

“He’s got a good engine even if he still hasn’t quite worked out what this game is all about. He will definitely progress through his grades.

“The horses I rode in Melbourne (Tom Melbourne – second last – in the Australian Cup, Star Turn – third – in the Newmarket Handicap and Shutter Bug – last – in the Matron Stakes) were not good enough unfortunately, but I was happy to be back riding there.

“There will be more opportunities in a couple of weeks and the big races in Sydney (The Championships) are also around the corner.”