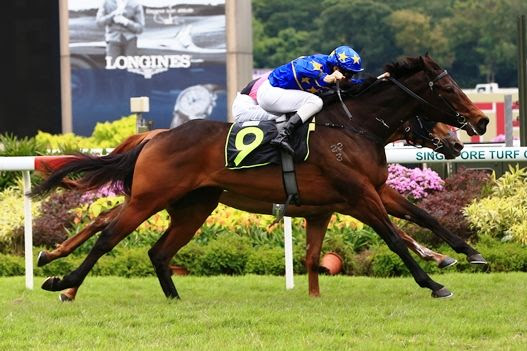 The well-supported Lim’s Royal produced a late burst through a sardine-packed situation close home to land the prize in the $65,000 Initiation race over 1400m on Sunday.

At the 300m, punters looked like they had done their dough when the $11 favourite was caught behind the eight-ball between Taichi Belt (Vlad Duric) and The Golden Goat (Olivier Placais).

Sweating on a gap to manoeuvre through, jockey Danny Beasley seized the opportunity even if it came in half measures at the 200m as a needlehole passage between the two horses widened up.

It seemed to narrow down again as Taichi Belt rolled in, and with whips flying all over the place, the three raced tight for a few strides, with The Golden Goat – already a beaten horse then – taking the rough end of the stick as he got bumped sideways and lost ground rapidly.

But all honours to Lim’s Royal, who after elbowing his way through restricted room, still found another kick to go and beat Red Duke (Gerald Mosse) by a head with Ground Control (Glen Boss) third another 1 ¼ lengths away. The winning time was 1min 23.38secs for the 1400m on the Long Course.

Beasley played down the intrepidity of his decision to go where many would have feared to tread, paying all the credit to the Rothesay three-year-old.

“At his last couple of runs, he got off the bit all the time, and didn’t move when they left him where he was. He was really green and couldn’t go at all and was 100 yards behind the second-last horse,” said the Australian hoop.

“I had him in a good spot in midfield today but I don’t know what it was, he threw his head up every time I put a bit of pressure on the inside rein.

“Otherwise he was travelling okay. Shafiq (Rizuan on Jacks Secret) was three-quarter length off the fence and I didn’t want to go around him and waited for a gap to come up on the inside.

“The room between Vlad and Olivier looked good enough for him to pick it up. Think he got hit by Olivier’s whip and Vlad’s horse squeezed us in, but he got it right in the end.”

Burridge, who was at a training double having earlier won with Premier Fighter, described Lim’s Royal as a “good horse in the making”.

“He’s a nice horse, even if he’s still very green. At his first two runs, he missed the start, got squeezed and got back,” said Burridge.

“He’s a horse who does not have a sweat, he’s dry-coated, but he has plenty of upsides. He will go for a break now and when I bring him back, he will be a good horse in the making.”