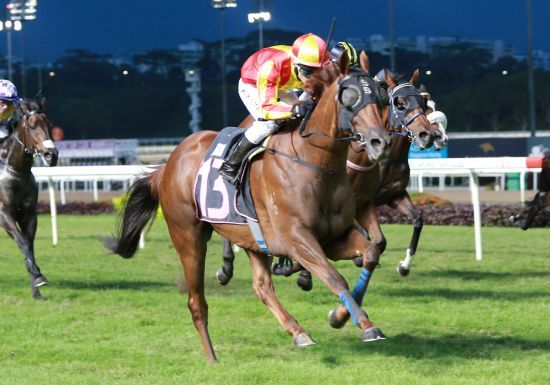 That big first might not have come for his new master John O’Hara, but the 30-year-old Kedah-born rider was first and foremost happy he had broken the duck at his 17th Kranji ride.

Another longshot, One Force (Iskandar Rosman), was fighting out the finish with O’Reilly Bay (Zy Nor Azman), but they were both left standing when Lim brought Spirit Seven with a well-timed run, sailing home on the outside for quite a soft win by 1 ¾ lengths from One Force.

Plato (Alysha Collett) plugged on along the rails to finish third another three parts of a length away. The winning time was 1min 35.62secs for the 1600m on the Short Course.

“I’ve always wanted to ride in Singapore and it’s great to finally ride my first winner here,” said Lim, who had 106 winners under the belt when he was indentured to trainer Wayne Lim Woei Chet up North.

“It’s been a bit of a wait, but I just had to be patient. I hope I will get more support from other trainers from now on.

“It doesn’t matter if that first win didn’t come for Mr O’Hara. I’m sure I will ride a winner for him soon.

“I actually rode that horse at his last start. He ran on very well then.

“Credit to the trainer who has kept him fit after that run. The horse has actually improved.

“We had a good run from the start. He doesn’t have a lot of speed, but we were able to secure the rails, and we improved to be midfield.

“Turning for home, I took him to the outside. When we got the gap, he just flew home for a very nice win.”

Lim, who has already been nicknamed AK47 by the local media, actually knew the Hala Bek five-year-old fairly well as he rode him at his last start (Class 4 Non Premier over 1400m) last Friday. The pair turned in an eye-catching fourth.

Though Spirit Seven was the first standby starter this time, Burridge booked Lim again – an inspiring move from the Malaysian’s perspective no doubt, after Roman Classic was withdrawn.

“He won a nice race two starts back, which was on Polytrack, but he also ran well on turf before,” said Burridge.

“He’s come right now. He had some feet issues that we have sorted.

“We can train him more properly now and he won a solid race tonight. AK rode him well at his last start and that’s why I kept him on. Good for him to get his first winner.”

With that fourth win, Spirit Seven has now taken his stakes earnings past the $110,000 mark for his owner Chionh Teck Swee.