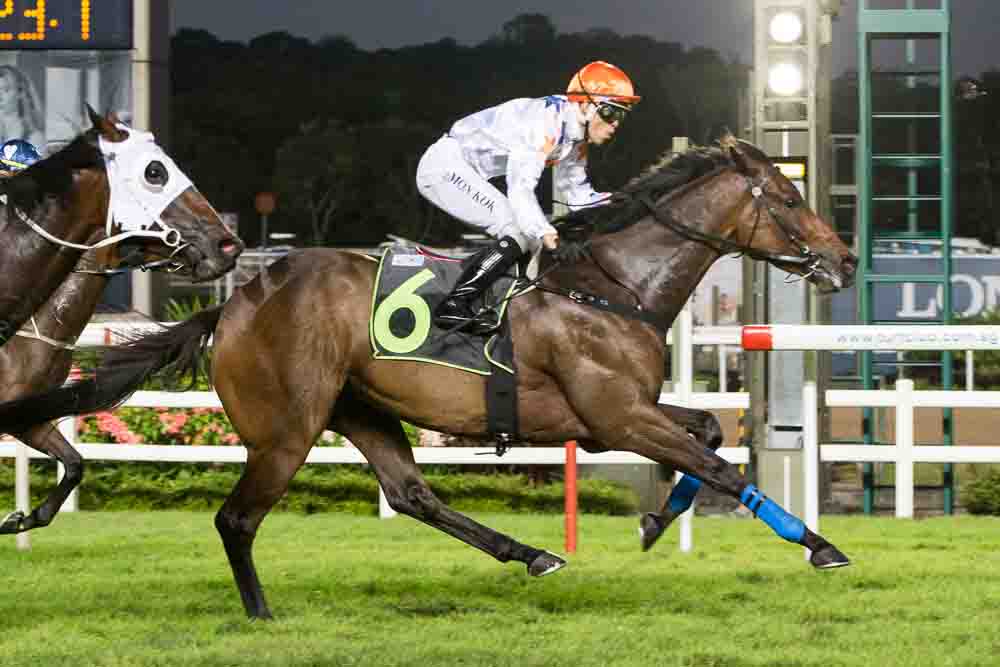 Adipson has not taken too long to open his account in Singapore, even if the So You Think three-year-old had to dig deep into his untapped potential to get the nod in the $75,000 Restricted Maiden race over 1400m on Friday. Formerly with Newcastle trainer Kris Lees, albeit he never raced in Australia, Adipson gave a sample of what he had under the bonnet at his first couple of Kranji starts, finishing off nicely with two seconds in two similar Restricted Maiden races, but over 1200m. Risen to seven furlongs, Adipson was expected to find the line even better. The even-money favourite indeed clicked into another gear when apprentice jockey Simon Kok Wei Hoong popped him off the fence and turned him loose upon straightening.

The charge to the line was, however, not as eye-catching this time. Whacking away between St Alwyn (Vlad Duric) and Mr Fat Kiddy (Joseph See), Adipson still went a touch better than the other two to come up trumps in a three-way finish.

Mr Fat Kiddy had to settle for second place three parts of a length away while St Alwyn, who drew first blood when he collared race-leader Fight To Victory (Yusoff Fadzli) at the top of the straight, wilted to just miss the runner-up spot by a neck. The winning time was 1min 23.15 for the 1400m on the Long Course.

Winning trainer Steven Burridge admitted to having high aims for Adipson who is raced by a syndication managed by his wife Julie, the J Racing Bloodstock No 2 Stable, even if he felt a little let down by the workmanlike manner of Friday’s win.

“I have to thank (bloodstock agent) Lou Liparota from Melbourne. He told me he is by a Zabeel mare (Reglisse) and will get 1600m to 2000m.

“His first-up run was sensational, but he grinded away tonight. He was a bit one-paced.

“I’m happy for Julie who has syndicated this horse to a nice group of people. I think he’s a bit of a late maturer and hopefully he can be a Derby horse next year.”

With that 16th success, Kok was joining Wong Chin Chuen at the top of the Singapore apprentice jockeys’ table, but Burridge’s apprentice jockey is effectively the new lamplighter given that Wong recently graduated to the senior riding ranks.

“We wanted to go forward, but there was too much pace. It was also messy in midfield, so we found ourselves tracking up St Alwyn, who was one of the horses to beat,” said the Malaysian lad.

“We were basically in a winning position. They went through quite quick sectionals, and he produced the best turn of foot in the end.

“He was a bit green when I pushed the button, but he’s quite a progressive horse and will improve from tonight’s win.”

With his two previous second placings, Adipson has now taken his stakes earnings past the $65,000 mark for the J Racing Bloodstock No 2 Stable with that maiden win.